I just watched a vid where a learner rider nearly got hit....

In the UK, the TLDR on overtaking (which lane splitting or filtering basically is) is that the overtaking vehicle gives way. Can't seem to get it in the lads head that he should take responsibility for his actions. I wonder if we were all that stubborn to accept we could have been in the wrong in our yoofs? 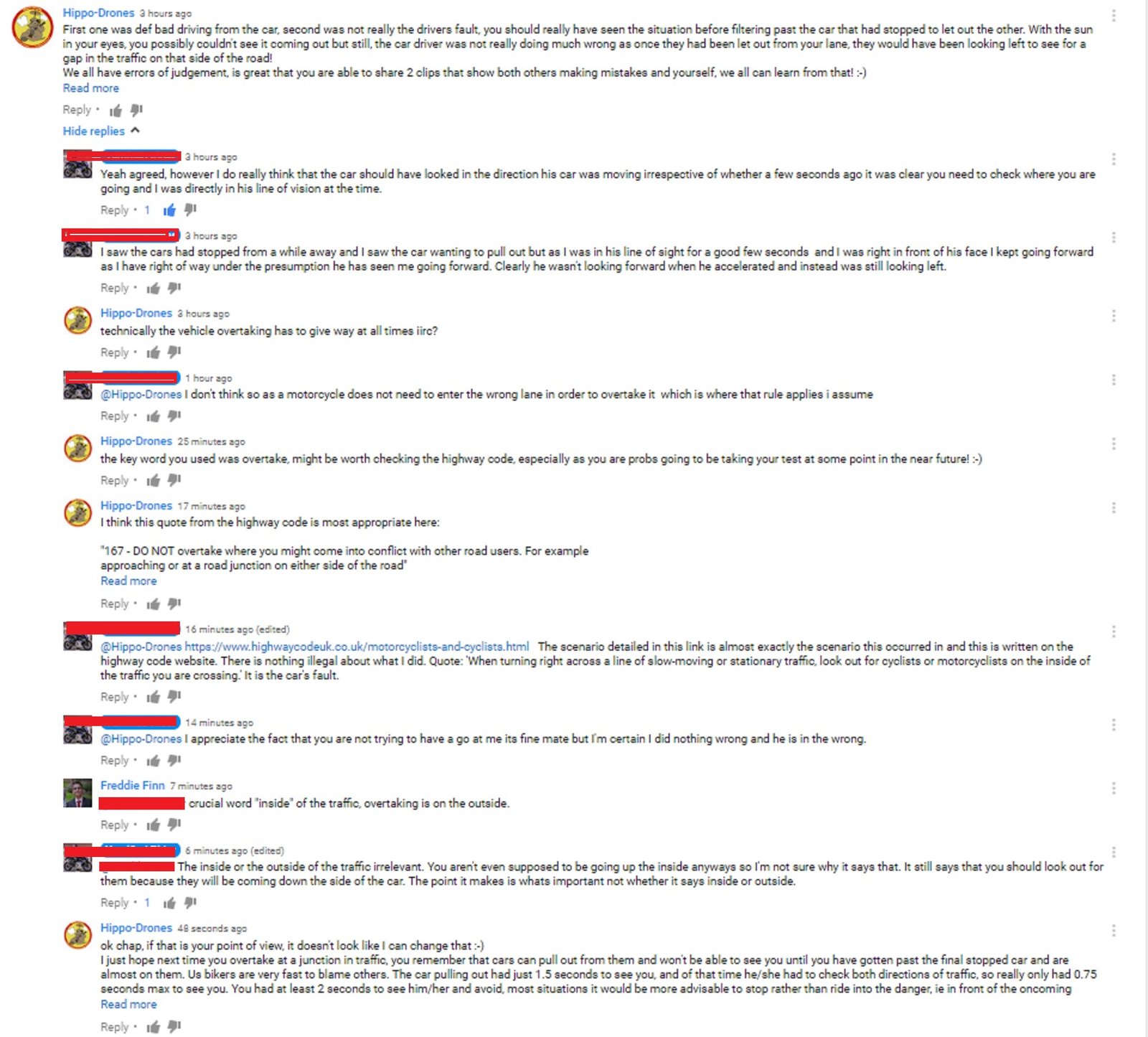 soz, hadn't realised the screenshot missed out the end of my post:

ok chap, if that is your point of view, it doesn't look like I can change that I just hope next time you overtake at a junction in traffic, you remember that cars can pull out from them and won't be able to see you until you have gotten past the final stopped car and are almost on them. Us bikers are very fast to blame others. The car pulling out had just 1.5 seconds to see you, and of that time he/she had to check both directions of traffic, so really only had 0.75 seconds max to see you. You had at least 2 seconds to see him/her and avoid, most situations it would be more advisable to stop rather than ride into the danger, ie in front of the oncoming vehicle which had not seen you until at most 0.75 seconds prior!
Click to expand...

Why is this kid making vlogs if he is still only on a learners permit? He should be putting all of his attention into his surroundings. Also, he needs to take some English classes to learn the difference between 'over taking' and 'inside'.

Personally I agree re the L plates thing too but that is not our place to say, it isn't illegal for him to do so, but like you say, when learning, you need your brain focussed on learning. He seemed not to grasp that filtering/lane splitting is also still overtaking too!
Reactions: LoneWolfer

I ride a
Triumph Tiger 800XC

There's no point telling everyone who will listen that you were technically in the right, from the comfort of your hospital bed. I'm sure I also thought I was immortal when I was his age. Thankfully I wised up, eventually. Hopefully he does also.
Reactions: Riderguide, LoneWolfer and HippoDrone

Haven't seen the video.
But sometimes it is a call you have to make on experience.
Lack of experience makes less safe calls. (no matter if the law is or isn't on your side, you are the weaker part of traffic).
Reactions: HippoDrone

There was another younger guy somewhere from the states that had a video of him trying to vlog and he recently got his first bike and his motorcycle license. He even admitted "maybe I shouldn't be doing this... it's hard to talk and ride at the same time". I agree... vlogging should only come after riding is literally all muscle memory.
Reactions: Riderguide, GardenShed and HippoDrone

Agreed. I made that same mistake.
Reactions: dandoolittle and HippoDrone

I filter all the time and even with near misses, and some little love taps I always says it's minimum 50/50. People just don't/can't see you even if they do look to be fair. It's hard spot a bike in traffic so the onus is always on us really just to be ready NOT to go for that gap etc and give way to the great big steel monster of ouch. Anyway basically you're right IMO @HippoDrone is what I'm saying
Reactions: Riderguide and HippoDrone

I ride a
Triumph ST1050 Sprint

I agree with you @HippoDrone ....... to be fair, it's all about getting home in one piece, as a biker the onus is on the rider regardless of fault, we can't as vulnerable road users expect everyone to see us, we live by the sword unfortunately, if I'm filtering it's at my risk, just because it's legal doesn't mean you can ride careless. Gives me some great thought for some new content for my channel.
Last edited: Jun 8, 2019
Reactions: HippoDrone and Gorilla
You must log in or register to reply here.
Share:
Facebook Twitter Reddit Pinterest Tumblr WhatsApp Email Link