Welcome to MotoVlog.com.
Where are you from? What do you ride? Say hello, what do you like? Why are you here?

Got a photo of your bike?

Thanks Dandoolittle. I'm from the UK and now living in Italy. I just started Vlogging a month ago, opened my Youtube channel a couple of days ago.

I recently attended the Motoguzzi open house around Lake Como and the Distinguished Gentlemans Ride in Bologna. So have the video footage from that. I just finished editing the Gentlemans ride and when i get the time i will edit the Guzzi ride out. This is my first editing project, so i'm just winging it at the moment. I learnt a lot during the editing process of the gentlemens ride, mainly that i need a better action cam with stabilisation, and i should have taken footage from various angles, also i need to work more on the sound.
My setup is a Sena prism wifi and a Tascam DR-05 with a Sony ecm mike. I didn't want to go the Go-Pro route as i like the streamline design of the Sena, but i can no longer get wifi on it, despite reloading the software and i need image stabilisation to smooth out the ride footage.

I'm riding a Triumph Thruxton R, have had it a couple of months now and its a blast. I'll be doing body and engine mods in the near future that i would like to include it in my vlog, The bike itself is not very practical for touring so i might have to add another bike next year and use that for doing long distance touring. 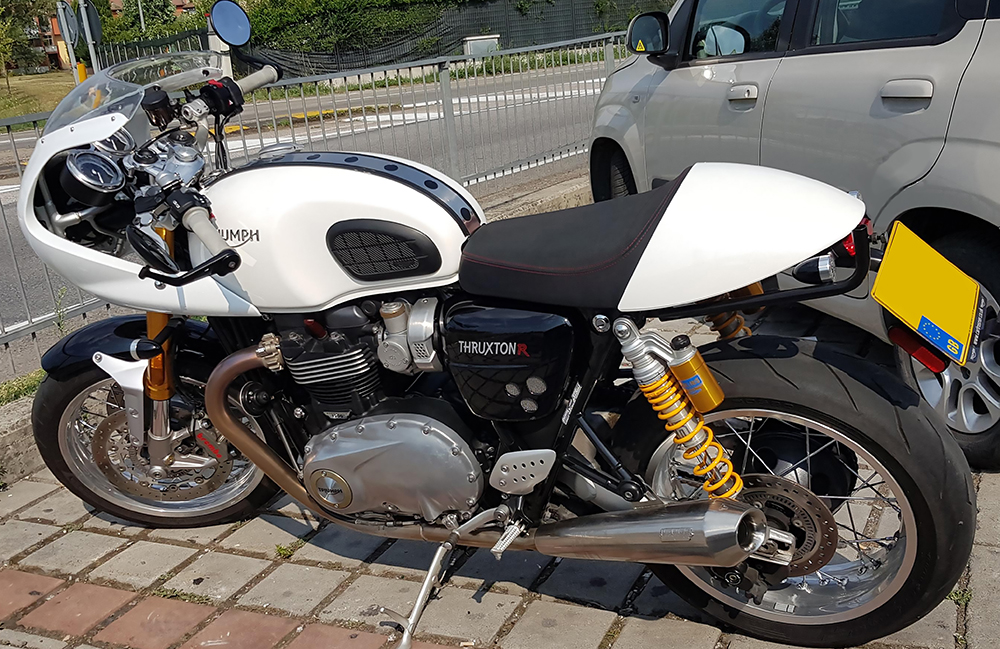 Welcome John. I once lived in Northern and Central Italy for two years. I would love to be able to go back sometime to ride around. There are some beautiful mountain roads there.
Reactions: JohnD63
J

Thanks. I usually spend some time at Futa pass, between Bologna and Florence. It's a fantastic proving ground for bikers with twistys, long sweeping bends and stunning views. They say that Ducati use it to test their road bikes. Once i get the hang of vlogging, i'll do a review.

Hi John, welcome to the forum. Your bike looks lovely, I have a Triumph too, but mine is a triple. I am quite envious of where you are living now!
J

Thanks HippoDrone, as they say, 'the grass is always greener on the other side.'
Reactions: HippoDrone

JohnD63 said:
Thanks HippoDrone, as they say, 'the grass is always greener on the other side.'
Click to expand...

Not in Florida. The grass is greenist here
Reactions: HippoDrone
J

HippoDrone said:
Hi John, welcome to the forum. Your bike looks lovely, I have a Triumph too, but mine is a triple. I am quite envious of where you are living now!
Click to expand...

Sorry HippoDrone what i meant by my 'grass is always greener comment' is that it always appears that way until you arrive on the other side. The main plus here is good biking weather and the food, that's if you are happy to eat copious amounts of pasta and pizza. I'm here because my wife is Italian and she wants to be close to her family, so i will make the best of my situation. There's a reason why over half a million Italians have moved to the UK to make their homes there.
Reactions: HippoDrone

It is incredible wet and windy here right now, a slightly longer and warmer summer would be awesome, but like you say, swings and roundabouts an all that!

Welcome and awesome you attended one of the DGR rallies. I attended the one near me and enjoyed riders putting on some style.
Reactions: JohnD63
J

R-Rated said:
Welcome and awesome you attended one of the DGR rallies. I attended the one near me and enjoyed riders putting on some style.
Click to expand...

Thanks, it was a blast, we were lead by a procession of police bikes and a Lamborghini squad car. Doesn't get any cooler than that
Reactions: R-Rated and HippoDrone