Has this been done anywhere? The thread on 50cc bikes got me thinking, I actually haven't owned many, but worked in a dealer for years so rode loads, demo bikes are cheap to run hahahaha.

Suzuki X1 (ZR50) (my apprenticeship bike haha)
Suzuki ZR50SL < awful
Suzuki GP100 < as a gullable teenager I was jammed in to this bad example by a shit dealer
Suzuki GT250 X7 < pig but a classic
Yamaha TZR250 < rode the tits off this minter - 1st wife took it to IOM in 1994
Honda CBR600FN < special special bike
Company bikes were many ....... I had the run of many demonstrators for a few years - but BMW K1100RS, BMW R1100GS, TRIUMPH SPEED TRIPLE, TIGER, DAYTONA, SPRINT, TROPHY, YAMAHA YZF750SP < (which was a poor mans RC30 but still very expensive hence we couldn't sell it and registered it as a demo) ..... was lucky enough to ride almost everything from the 90's. Worthy of a mention was a Yamaha GTS1000, rare and quite a decent ride and I wonder if many are out there still?
Had another TZR250 ...... plus for fun a couple of Yam Scooters thrown in for cheap giggles, a Beewee 100 and a 125.
An R6, an R1 and after much changing my mind back & forth I went to an adventure bike, my BMW F800GS which ticks a few boxes but not all ....... I have itchy feet. What's next I wonder?
Last edited: Mar 7, 2019
Reactions: HippoDrone

There may be one, I don't recall seeing it though!

Honda MT5 - this is where it all started for me way back in 1990
Honda CB100N - used to troll folk on 125cc bikes with this, hilarious fun
Kawasaki AR125 - crashed it into a hedge and it got stolen after I fixed it
Yamaha RD125LC - silly fun in bright yellow paint
Honda CB250RS - purchased as a do'er'upper sold for a few quid more than it owed us
Kawasaki KMX200 - loved this bike, wouldn't mind another if they still made them
Honda VFR400 NC24 - silly fun, drank battery fluid
Ducati M750 Monster - really took some stick, commuted on it all year round
Honda CBR600F - boring bike mostly
Triumph 1050 Speedtriple - used to troll sportsbikes with this, great fun
Suzuki GSX-R750 k7 - this was a bloomin fast bike, not too tall either
KTM EXC250f - didn't hugely get on with this one although it was a lot of fun still
KTM SM640 - heavy lump of orange, flipped it showing off to girls
Husqvarna SM510R - bestest mest fun bike I have ever had
KTM EXC200 - best dirt bike I have ever ridden, got stolen sadly
KTM EXC300 - converted it into a supermoto, very silly bike
Yamaha XS400 - custom tracker
Ducati 1098 Streetfighter S - wanted to love it, most expensive mistake I have ever made
Moto Guzzi V7 Stone - current bike
Kawasaki ZX636R - best sports bike I have ever had or ridden
Yamaha RXS100 (very tuned) - purchased for a fun race series some mates and I came up with called the 125hundreds
Ducati Sport Classic 1000 Biposto - had hoped to love the bike but didn't
Triumph Street Triple 765R [LRH] - current bike
Beta Alp 4.0 - current bike
Last edited: Mar 8, 2019
Reactions: jasonrides

haha I forgot I had an AR125 too!!!! I really liked that bike.
Reactions: HippoDrone

HippoDrone said:
There may be one, I don't recall seeing it though!

The one I always fancied and still do to be fair, a little NC30. Just a baby VFR750R OMG a bit of wee just came out :-D
Reactions: HippoDrone

The NC24 was a fun bike for sure, it drank battery fluid though and had had a hard life!
Reactions: Riderguide

Not that many for me.

THERE it is!!!! An NC30. Beautiful. Followed up by Biposto 748. Was the Duc yellow? I once played out on a yellow one. I owned a TZR250 at the time and it felt the same size. Fantastic thing the 748. Then the Speed Triple! Pretty much three bikes I could still live my dream with today.
Reactions: tarmacjapa

RideSkills said:
THERE it is!!!! An NC30. Beautiful. Followed up by Biposto 748. Was the Duc yellow? I once played out on a yellow one. I owned a TZR250 at the time and it felt the same size. Fantastic thing the 748. Then the Speed Triple! Pretty much three bikes I could still live my dream with today.
Click to expand...

It was yellow until I threw it down the road. Then I painted it the same scheme as the IMS Ducati team bike...I think it was called IMS. It was such a cool bike. I swaped it for a Nissan Skyline before they became super expensive and rare
Reactions: Riderguide

Supermoto isn't just a bike, it's a way of life

I'm definitely thinking I need a Moto. A WR would be a blast, maybe a 400.

This isn't mine obviously, but mine was a perfect replica of this bike.

Just bought a bike today, but my list is still the shortest here. I now own 2 bikes. Wasn't intentional, but I ended up with them both being the same bike, just different sizes. Not complaining though, love both of them and they have different ride styles from eachother.
2008 Boulevard s83 and 2009 Boulevard s40. 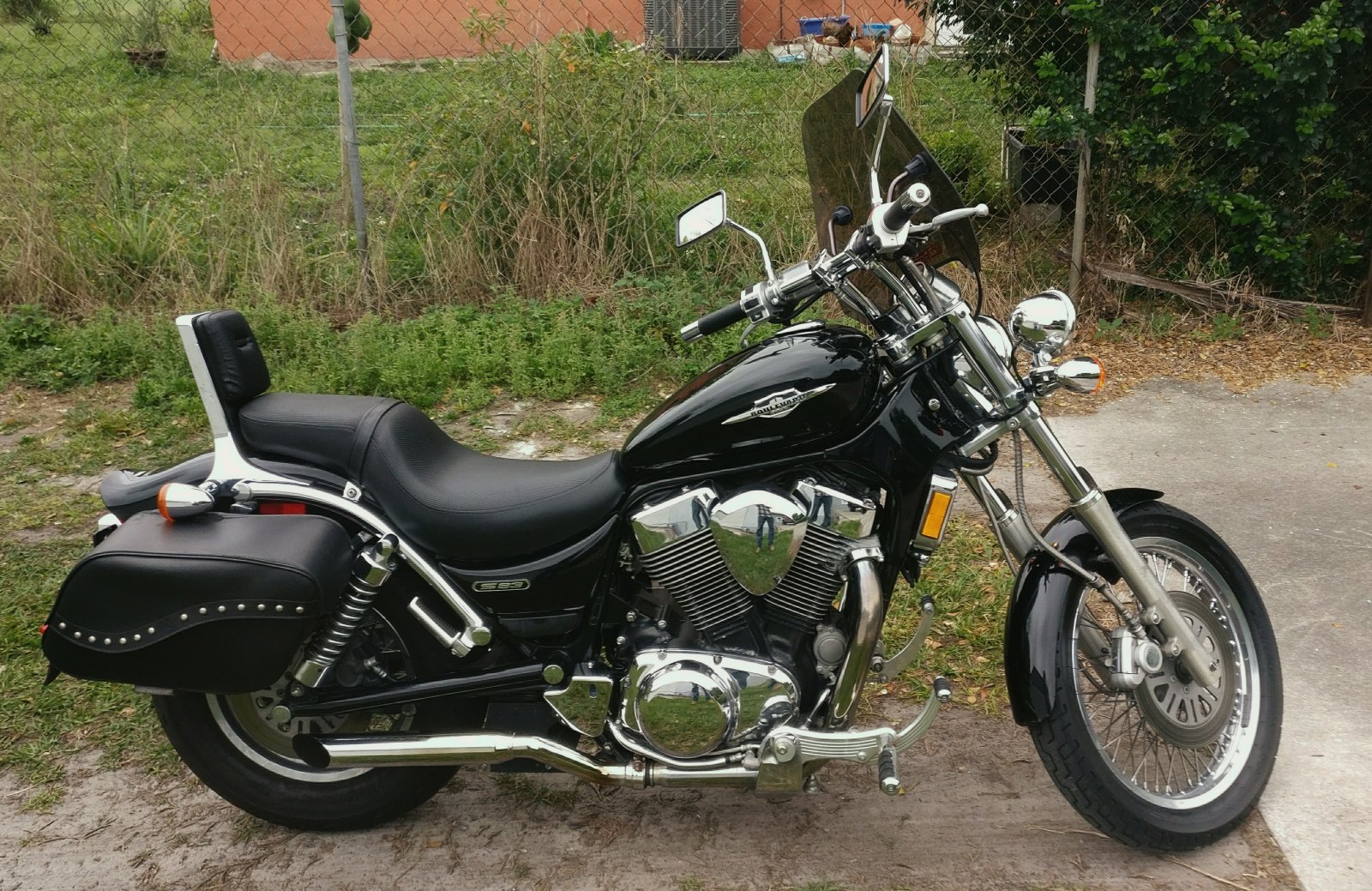 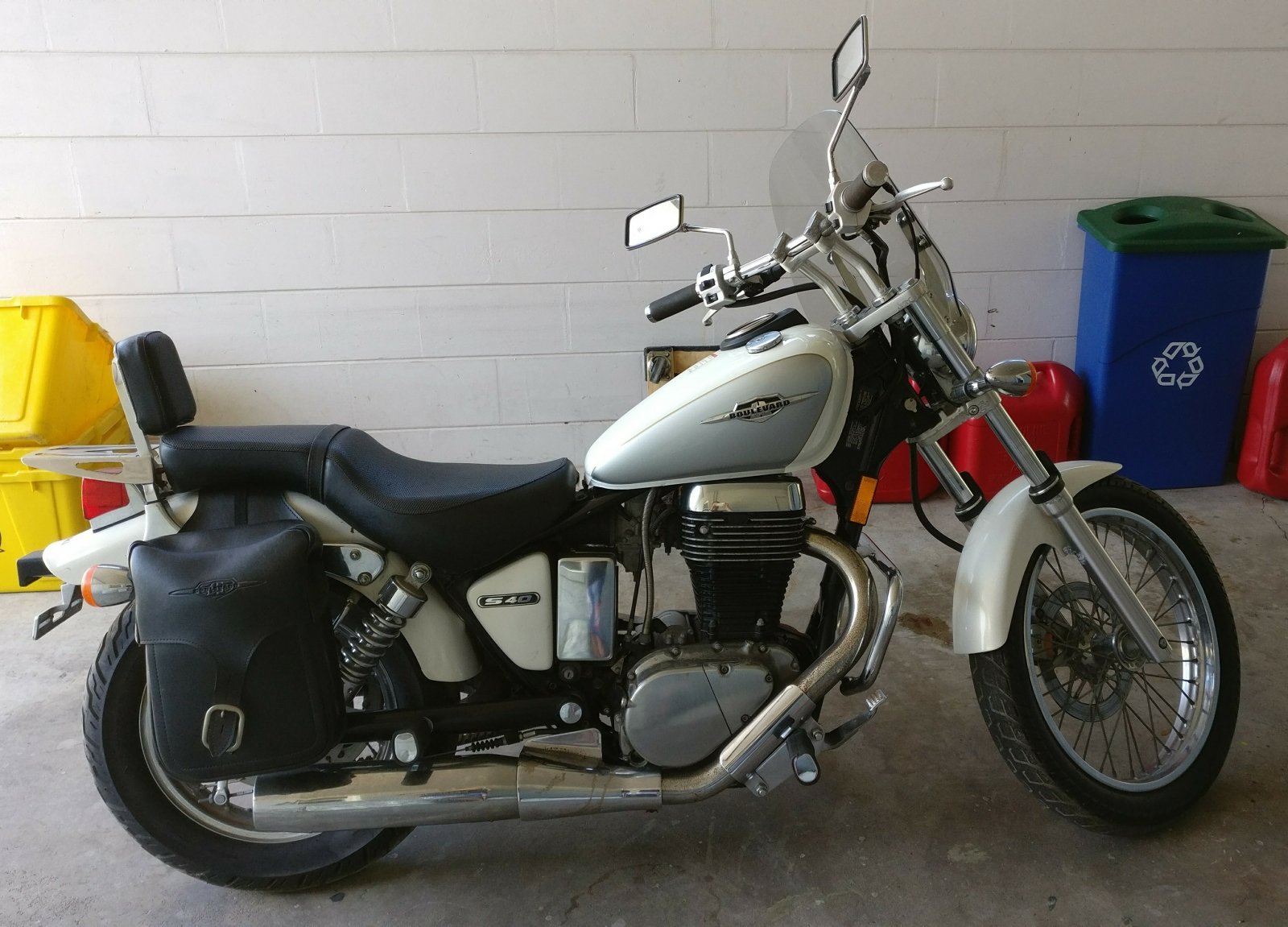 Both photos taken day of purchase. Both bikes have the windscreens taken off now and the s40 has a tailbag instead of saddle bags aswell as aftermarket rear turn signals.
Any Suzuki cruisers out there?
Reactions: Riderguide

both very different to ride I imagine with the different engines?

HippoDrone said:
both very different to ride I imagine with the different engines?
Click to expand...

Very much so. If I'm going down a highway or any long distance the s83 is so much faster and more comfortable. Once I hit any slow tight turns I want to be on the s40. The s83 still handles great in the turns, but that s40 is so light and nimble. I'm thinking of maybe turning the s40 into a dirt tracker.
Reactions: HippoDrone
You must log in or register to reply here.
Share:
Facebook Twitter Reddit Pinterest Tumblr WhatsApp Email Link