You are using an out of date browser. It may not display this or other websites correctly.
You should upgrade or use an alternative browser.

An oldie but a goodie.

At the end of the tax year, the Tax Office sent an inspector to audit the books of a synagogue.

While he was checking the books he turned to the Rabbi and said, 'I notice you buy a lot of candles. What do you do with the candle drippings?'
'Good question,' noted the Rabbi. 'We save them up and send them back to the candle makers. Every now and then they send us a free box of candles.'

'Oh,' replied the auditor, somewhat disappointed that his unusual question had a practical answer.
But on he went, in his obnoxious way.

'What about all these biscuit purchases? What do you do with the crumbs?'
'Ah, yes,' replied the Rabbi, realizing that the inspector was trying to trap him with an unanswerable question.
'We collect them and send them back to the biscuit makers. Every now and then they send a free box of holy biscuits.'

'I see!' replied the auditor, thinking hard about how he could fluster the know-it-all Rabbi.

'Well, Rabbi,' he went on, 'What do you do with all the leftover foreskins from the circumcisions you perform?'
'Here too, we do not waste,' answered the Rabbi. 'What we do is save up all the foreskins and send them to the Tax Office. About once a year they send us a complete prick.'
Reactions: SighBored, HippoDrone, LoneWolfer and 1 other person

What is the difference between a Harley Davidson and a Hoover vacuum cleaner?

You can fit two dirtbags on a Harley.
Reactions: R-Rated, SighBored, LandyVlad and 2 others

"Did you hear our neighbor bought a motorcycle, and rides around like lightning?"
"You mean he is speeding?"
"No, he moves in zig-zags"
Reactions: SighBored, HippoDrone, Drakhen99 and 1 other person

The Pope decides to take a cross-country tour across America, beginning in California and ending in New York.
Somewhere in the Mid-West, the Popemobile breaks down, and while it’s repaired, the Pope continued his journey with a limousine rental.

After a few hours, the limousine driver rolled down the glass partition, and spoke: “I know I’m not supposed to talk to you, your holiness, or highness - I’m not even sure what to call you?”

“Well, when they told me who I’d be driving, I was really thrilled. It’s such an honor, and if there is anything I can do to make it a better trip, I’ll do my best to make sure it happens.”

The Pope thought for a while, then replied, “You know, before I became Pope, I really enjoyed driving. I would drive for hours. But now, no one will allow me to drive anywhere. Would you mind if we switched places and I can drive?”

The limousine driver agreed and the two switched places.

After a while, the Pope became relaxed, turned the radio on, hung his arm out the window, and just enjoyed cruising. However, not aware of his increasing speed, he was soon pulled over by a motorcycle cop.

The cop walked up to the limousine, saw who was driving, said, “Excuse me, your holiness, for a moment”, then returned to his bike and got on the radio.

“Chief, I think I have a problem. I believe I pulled over someone pretty important, and I’m not sure how to deal with it.”

The Chief responded: “Don’t tell me you pulled over a state representative again, Johnson?”

“No, I think this person is more important.”

“No, I believe more important than the Governor.”

“Johnson, tell me you didn’t pull over a Presidential Motorcade.”

“No, they may be even more important than the President.”

“What? Really? Who’s more important than the President?”

“Hell if I know, but the Pope’s driving.”
Reactions: R-Rated, MachKneel, SighBored and 1 other person 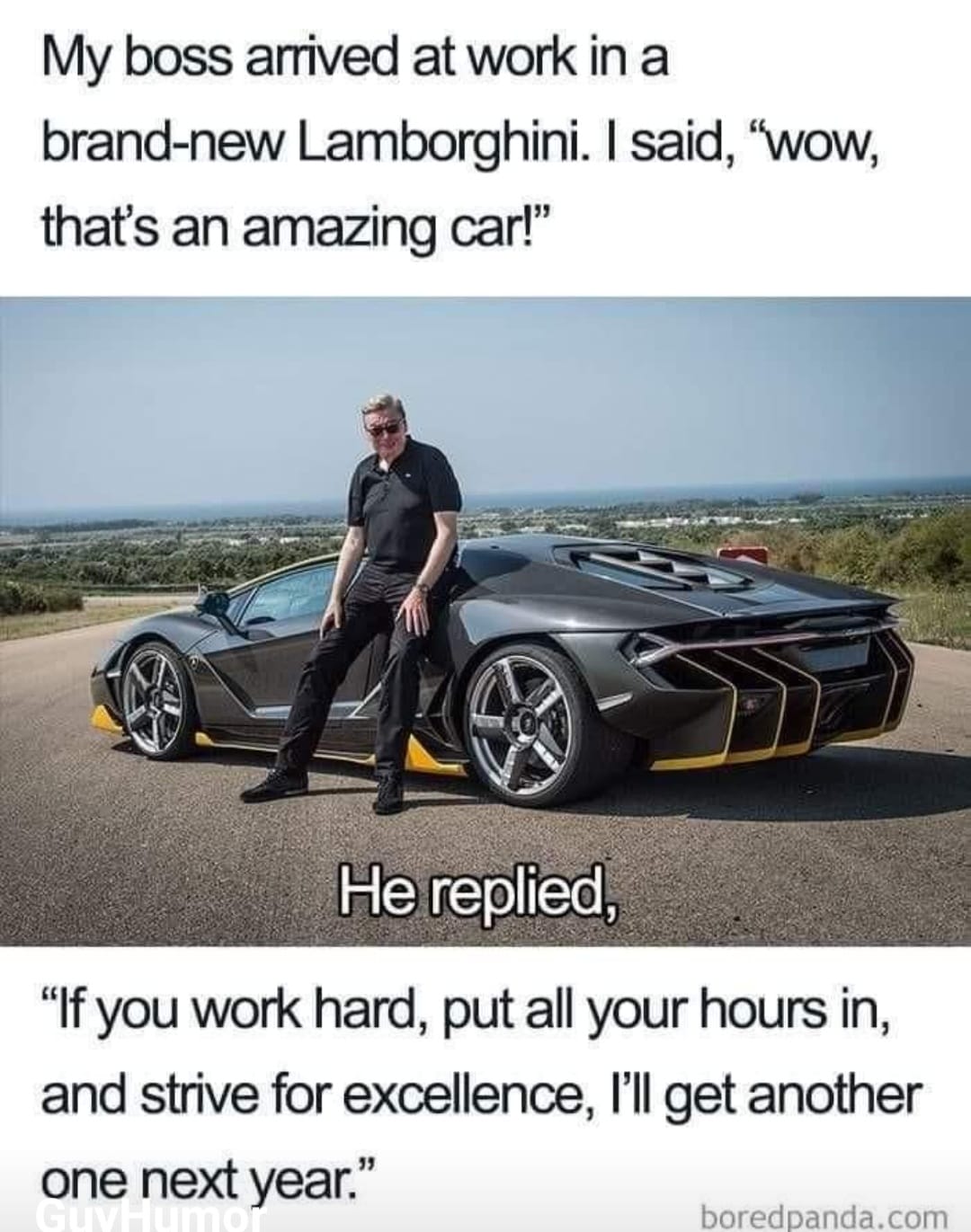 Bus is fully packed, people are also standing in between the seating area. In one sudden turn a young girl loses her balance and falls in to the lap of an old priest. She immediately rockets back up, blushing and sighs: "Oh my god!"
The priest remains calm and says: "No, not oh my god, just the key of the convent gate."
Reactions: R-Rated, SighBored and Drakhen99

Hungover morning in a submarine. Captain asks the helmsman:
"Where are we?"
"No idea..."
"Up to periscope height! What do you see?"
"Cargo ship right ahead."
"Load torpedo one... Fire! Now listen to the SOS signal and note down the coordinates..."
Reactions: YBGuy, R-Rated, SighBored and 1 other person


Hungover morning in a submarine. Captain asks the helmsman:
"Where are we?"
"No idea..."
"Good, keep it that way!?"

"Doctor, I can not see very well."
"No doubt, no doubt. You're in a fish store."
Reactions: R-Rated, SighBored, Drakhen99 and 1 other person

15 year old boy sits down at a bar and says to the barmaid: "Quick, give me a double whiskey!"
Barmaid: "Listen, kid, do you want to get me in to trouble?"
Boy eyes her a moment and says: "Not while I'm still sober..."
Reactions: R-Rated, SighBored, Drakhen99 and 1 other person

After the latest elections, where winning party promised to significantly reduce crime, police has received a harsh order, to lower the crime rate by 10%.
Two policemen observe a bruised and bloody dead body, by a dark alley. One of them counts, and then comments: "16 stab wounds in the lower back. That must be the freakiest suicide I have ever seen..."

Come on everybody! Pitch in. Third post in a row. I feel like a spammer
Reactions: R-Rated and HippoDrone

Doctor: "The situation is not good. You must be prepared for everything."
Woman: "Not everything. I already know his will leaves about half to his brother..."
Reactions: R-Rated

Since it is Halloween later this month I will share one the jokes my dad told me when I was young.

If you drive by a graveyard at midnight on Halloween and yell out the window - "HEY! WHAT ARE YOU DOING OUT THERE?
Do you know what you will hear in response?

Mom: "Thomas, what were you thinking? How could you tell uncle John he is stupid? Go right now and tell him you're sorry!"
Thomas: "Uncle John! I am so sorry you're stupid!"
Reactions: HippoDrone and R-Rated

Whilst at my favourite biker cafe I walked out towards the car park with all the bikes about. Looking around for my wife I noticed a younger guy doing the same. ‘Lost your wife mate ‘? I said. ‘ yes girlfriend actually’ he replied. ‘What’s she look like ‘ I said ‘ Tall busty looks great in the leathers and sexy as hell ‘ he said What your wife like. ‘ Don’t worry about her let’s look for your girlfriend first ‘ I replied
Reactions: YBGuy, LandyVlad, R-Rated and 1 other person

Apple just had a leak, about the unbelievably wide selection of new products, they are planning on unveiling this coming spring. Now some of these products are not quite complete yet, which might be why they did not do the big reveal this fall, but most of them are said to be ready and polished.
First two products are directly related to bettering our sleep habits. Everyone knows how difficult it is to feel rested, when the sleep cycles are not properly followed. Apple comes to the rescue with iLid, a product sceptics would just call sleep mask, but the confidential leaker promises, it is a revolutionary way of fighting against light pollution, and thus improving the quality of the sleep manyfold. A product most people will be pairing this with, is iOpener, an alarm clock, that is more than just an alarm clock. Now you can pair your alarm clock with your iPhone and set alarms directly from iPhone, without even having to touch the alarm clock itself. Gone are the days, when you wake up, not knowing what time it is, and if you are late for work, now you can be sure. Obviously it is clear, that iOpener can be also synced to start your Apple kitchen devices.
Great news for couples, about to leave the calm harbor of engagement, to take on the stormy seas of marriage. Absolutely revolutionary set of marriage rings iDo are also coming out. These rings are promised to do something none of your rings have done before - they can be connected to your iPhone, via bluetooth. Did you remember to wear your ring? Just pick up your iPhone, and make sure.
In addition to these products, clearly targeted for Apple fanboys, there are two revolutionary web services about to be launched. First, never seen before, completely free encyclopedia, accessed for a small monthly subscription fee, called iKnow and a Mariachi-heavy music portal iIii.
Reactions: R-Rated, YBGuy, HippoDrone and 1 other person

"If you don’t build your dream someone will hire you to help build theirs."​

I know most people arn't in to Chuck Norris Jokes but I still think there are a few that are pretty funny.