Gather around kids, it's story time!

The all started after I reported a video to YT which had used some of my content without permission. It is always my best practice to request for immediate take down (not the 7 days notice crap) whenever I encounter such videos. The reason is because I have absolutely no mercy for thieves that knowingly steal other people's property, nobody steals "by accident". Let's continue.

After the video was taken down by YT, I started getting emails, YT comments, Instagram comments + messages, Facebook Page comments + messages, all requesting me to retract by report, claiming to be sorry, to forgive him, even wanting to "bribe" me about USD 200 to take back my report. It is my best practice to ignore all such communication. I never once replied to any of these. Why am I so cold hearted? I don't have any f**ks to give people like this a second chance, because to me, they are only "sorry" and "regretful" after they are caught. If they were not caught, they will still be doing the sh*t they are doing. So, sorry not sorry.

You might be thinking this is a very normal story, probably some of you have encountered the same. Well, the (hopefully) interesting bit is coming up. As mentioned, the thief tried to contact me but I happily ignored him, then he started using other accounts to reach me, pretending to be interested in the things I'm selling. However, if he was "really" my fan, he would know that I don't sell sh*t. So I may have accidentally replied to some of his other accounts but immediately stopped once I realized it was the same thief.

This is where is gets a bit freaky. Out of the blue, my mechanic buddy (The Cleaner on my Tech-Talk series) called me up. He told he that a guy from China had just called him up. I was like "Who the f**k was that?". He told me that this China guy at first thought that he (the mechanic) was me (sighbored) and wanted him to cancel the report, he was willing to pay the $200 but via WeChat pay (whatever the F that is, I don't use it anyway). My immediate thought was - How the F did this China guy get the mech's mobile number??? The mech was also puzzled why this guy had gotten his number and called him up. We discussed and assumed that this China thief might have seen the mech on YT and dug around, found his Facebook page for his workshop and got the contact number from there. The mech put his number there for customers to contact him.

When the mech told the China guy that he is not me, and that I'm just a customer that came to his shop, the China guy instead asked him for my number, and was willing to pay RM500 (a bit more than $100) for my number. Luckily the mech was smart enough not to take the offer (I bet it will be a scam anyway and won't pay him for real). I told the mech the story and told him to just ignore this China guy, stop any further communications. That's the end of the story right? Not really.

So a few days later, again my mech buddy calls me up. He said to me "Bro you know just happened?", obviously I didn't know. He continued, "A girl just came by to my shop looking for you..". I was like "Which one of my ex came?". Nah, I'm kidding. But seriously though, a Chinese girl did come to his shop, again looking for me. It turns out that the China thief had a friend in Malaysia, and in what crazy way managed to convince her to help him to find me. Again, my mech buddy was smart enough not to give out my details. The girl left his shop.

Why was this China guy so desperate to get me to retract the report? If you don't know, we all have a 3-strike buffer. If we reach the 3 -strike limit, the channel (or account) gets banned on YouTube. I am guessing this China thief probably had 2 strikes prior to my final blow, thus having all his other channels (in the same account) banned or something like that. I didn't really check the exact T&C. To me, this is obviously that if he could have reached 3 strikes, means he was really a scumbag thief that had ripped other people's stuff more than once. Hence I felt zero f**ks of pity for him.

The moral of this long @$$ story is that, I'm really glad I treasure my privacy so much that I don't show my face, where I live, my personal info or social media stuff, on the Internet. I feel from this incident that my move to remain as private as I can, is justified for me. Otherwise, he or any of his friends could have found me. I'm not afraid of them contacting me or finding me, I'm more concerned about the annoyance they will give me. 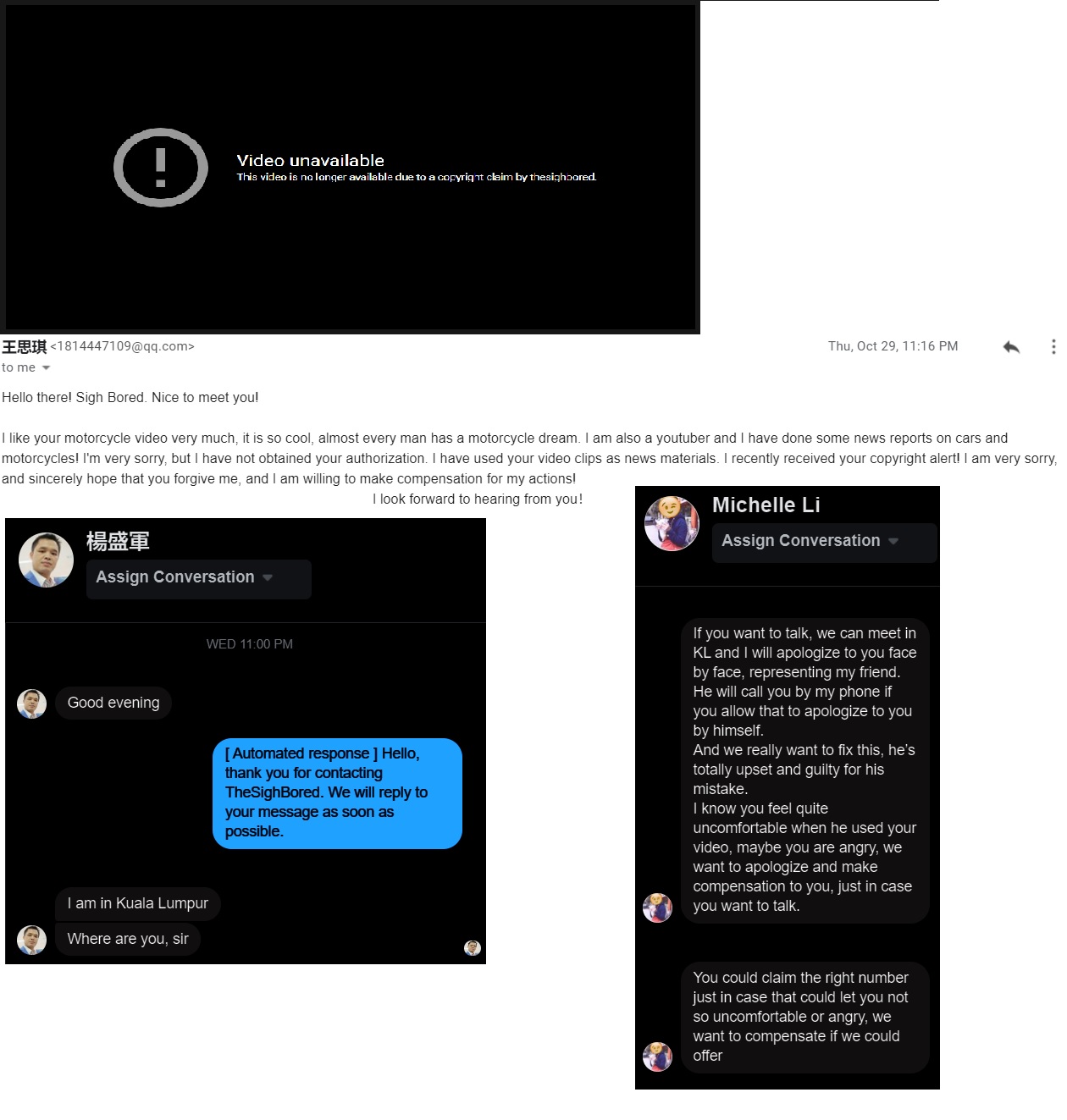 $200 offer meant nothing to me, if I were to get serious, I'd probably ask for $2000 at least. Too demanding? I take it as a very very expensive life lesson, heck maybe I should demand for at least $5000. Buy myself a another motorcycle with that. LOL.

Did the mechanic buddy at least get any favors from the girl, before turning her down?
Reactions: SighBored

Dam. Can‘t say I’ve ever heard someone offer $300 over a copyright claim. YouTube is a free site just take the termination open a new account and learn the lesson. $200 is a smidge under £150 that would be tempting. Say £20 a tank a tank range of 250 miles quick maths thats about 1,875 miles of range

Though I doubt he’d have paid up. I recently went on a name change and whilst they were just remaninto of existing accounts it’s not gonna stop a serious person from finding me it should be enough to stop the average Joe.

Theodor said:
Did the mechanic buddy at least get any favors from the girl, before turning her down?
Click to expand...

LoneWally said:
Dam. Can‘t say I’ve ever heard someone offer $300 over a copyright claim. YouTube is a free site just take the termination open a new account and learn the lesson. $200 is a smidge under £150 that would be tempting. Say £20 a tank a tank range of 250 miles quick maths thats about 1,875 miles of range

Though I doubt he’d have paid up. I recently went on a name change and whilst they were just remaninto of existing accounts it’s not gonna stop a serious person from finding me it should be enough to stop the average Joe.
Click to expand...

I think he had a few other channels under the same account, or something along those lines so it's like a huge lost to him. If you are just a minor imitation of someone else's channel name that's not against the rules, if you pretend to be them, or re-use their stuff as yours, then yes that's a strike.

On one hand I was kind of tempted to see just how much he was willing to fork out, not so much about greed but just to see how "sorry" he really was. At the end of day it isn't about the money to me, just the principle of making thieves pay hard. But ultimately I decided having any communication with him would be a nuisance for me.
Reactions: LandyVlad
You must log in or register to reply here.
Share:
Facebook Twitter Reddit Pinterest Tumblr WhatsApp Email Link