A little while back there was a thread that mentioned average watch time on your channel (It was a spin-off question in the original thread that never really took off). I thought it was pretty interesting topic because I didn't have anything to compare my own watch-time to in order to determine if it was good, bad, or something in between.

I recently received the "Creator Monthly" email from YouTube and, once again, didn't know what these numbers really meant in terms of how they compare to other motovlog channels with a similar subscriber count.

I've included my channel numbers down below with some thoughts.

Subscribers:
I'm horrible when it comes to self promotion so I'm sure that this figure could be better. Virtually all of my "marketing" has been interacting on other channels and the occasional Instagram Post. I've dipped my toe in Facebook Groups and started posting in two of them.

Views:
I'm completely indifferent about this number - I don't know that I've ever specifically went looking to see how many views a given video has had. My own personal barometer for success has been quality comments.

Minutes Watched
A number in the thousands has to be impressive - right? ‍

Quick math works out to roughly 5 minutes per view. I'd prefer that be a little higher but it is what it is.

Comments
As I said above, how I feel about a given video's success is weighted totally on the quality of comments it receives. I'm happy with this number - especially since many of those comments are at least a couple of sentences long.

Posts
I have no idea what this number is referring to - do you? 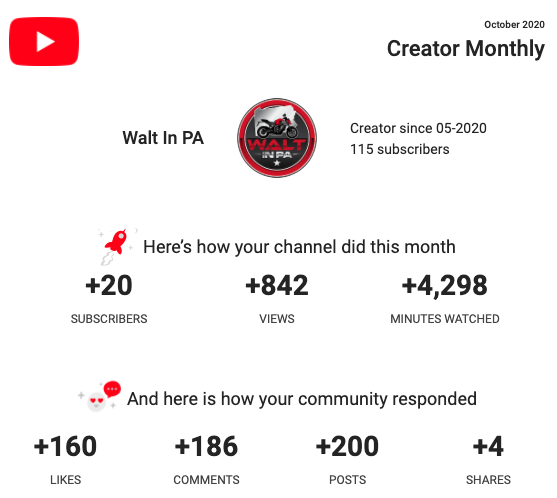 As I said before, I don't have anything to compare these stats to. All things considered, I'm happy with the growth of my channel so far. The community support has been amazing - I never expected to stumble into a community that was so willing to help one another grow.
Reactions: R-Rated and HippoDrone

I'm not sure what "posts" is either, I thought it might just be comments but I see they are the number next to posts so guess not. For my monthly stats the comments & posts are the same number, but yours is different.